Reference surfaces are elevation rasters that originate from some other source than a topographic survey. They are very similar to DEM Surveys in that they share the same vertical units, cell resolution and spatial reference. They can also be used as one or both surfaces in a change detection analysis.

The role of reference surfaces within the GCD software is intentionally flexible, enabling users to leverage them for several purposes:

Each reference surface can have multiple error rasters associated with it. These error surfaces are then used when performing a change detection analysis that uses spatially variable uncertainty.

You will be prompted to browse to an existing raster file on your computer. GCD is compatible with GeoTiff (*.tiff) and Erdas Imagine (*.img) raster formats. It is not compatible with any other formats including rasters stored in geodatabases, PostGIS etc.

The same raster import form is displayed after the raster is selected as that used to add an existing DEM survey. The form appears slightly differently when used for adding reference surfaces. The cell resolution and precision are both locked to those of the GCD project. This ensures that all reference surfaces are perfectly divisible with other rasters in the project. You can change the extent. Reference surfaces don’t need to be concurrent with each other or DEM surveys.

Reference surfaces can represent a statistical summary from a collection of DEM Surveys. For this feature to work you must have two or more DEM Surveys already loaded into your GCD project. The statistics available are:

In each case, the reference surface cell values are calculated on a cell-wise basis from the chosen DEM surveys. Only cells that possess data in all the selected DEM Surveys will possess a value in the output reference surface. 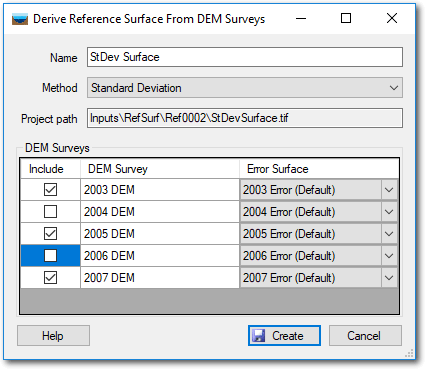 Uniform reference surfaces are constant rasters that possess the same value in every cell. They can be useful for representing engineered planes, safety thresholds, reservoir draw down levels and spill holes etc.

Right click on the Reference Planes node in the GCD Project Explorer and choose to “Calculate New Constant Reference Surface(s)”. Provide a unique name and then choose the DEM Survey that possesses the spatial extent that you want to use. No values from the DEM are used, GCD merely takes the spatial extent, cell resolution and map projection and applies it to the reference surface. 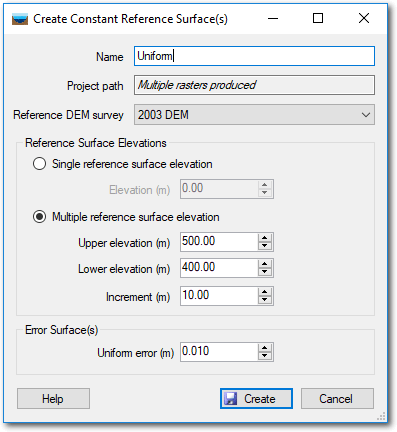 Each reference surface can have one or more error surfaces specified. These surfaces are managed much in the same way as regular error surfaces for DEM surveys.

Right clicking on any reference surface brings up the context menu that allows you to perform the three operations described below. Note that the Add To Map option is only available in the ArcGIS Addin version of GCD and not the Standalone.

Right clicking and choosing to edit allows you to change the name that GCD uses to refer to the reference surface. This does not change the name of the underlying raster file or the folder in which it is stored. It only applies to the name used in the GCD project.

Reference surfaces are added to the current ArcMap document with a stretched color ramp symbology.