DEM Surveys are the foundation of a GCD project. Projects can contain multiple DEM surveys, each representing a single topographic survey as a single raster file. Typically the surveys within a GCD project capture the same general location, although each raster can have slightly different extents. However all rasters within a GCD project must share some specific properties:

Right click on the DEM Surveys node in the project explorer and choose Add Existing DEM Survey. You will be prompted to browse to an existing raster file on your computer. GCD is compatible with GeoTiff (*.tiff) and Erdas Imagine (*.img) raster formats. It is not compatible with any other formats including rasters stored in geodatabases, PostGIS etc.

Clicking Add Raster causes the form to validate all the inputs and copy the raster into the GCD Project, adding a new DEM Survey. 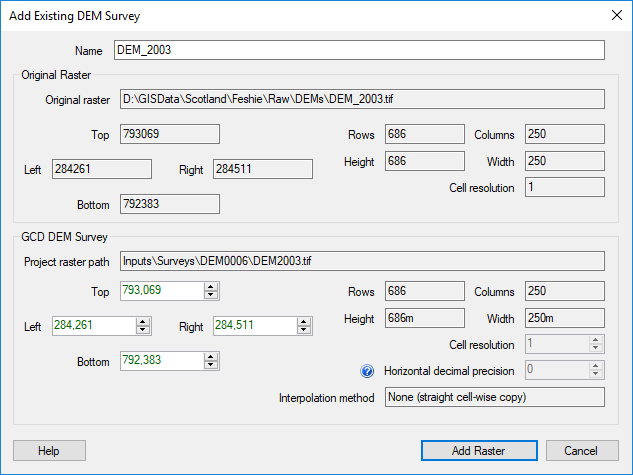 This video walks you through the process:

The DEM Survey context menu is accessed by right clicking on any DEM in the GCD project. The tools available on this menu are described below. Note that the Add DEM Survey To Map option is only available in the GCD AddIn version. 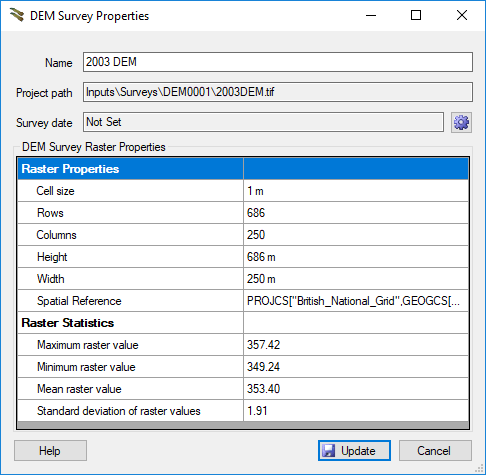 Click the settings cog button to change the survey date for a DEM Survey. A survey date is made up of separate date and time components. You must always set the value from largest to smallest unit. i.e. you cannot select a month without selecting a year.

Selecting survey dates is optional but recommended because it helps the GCD understand the chronological sequence of DEMs within a project. This determines the order that DEMs are displayed in tools such as the batch change detection.

The Add DEM Survey to Map command adds the selected DEM to the map (GCD AddIn only). Note this command does not add associated surfaces or error surfaces. This is a convenient command if you want to add your symbolized DEM inputs one at a time to the current ArcMap document.

All DEM Surveys within a GCD project can be added to the map with a single operation by right clicking on the DEM Surveys parent node in the project explorer (GCD ArcAddIn only).

The Delete DEM Survey command deletes a DEM Survey from the GCD Project. This does several things:

The DEM Surveys within a GCD project can be organized in the project explorer tree in several different ways by right clicking on the parent DEM Surveys.

The alphabetical sorting is based on the name that is provided by the user. The chronological sorting relies on the user having set survey dates for each DEM Survey (see above).